How does a cowbird learn to become one? 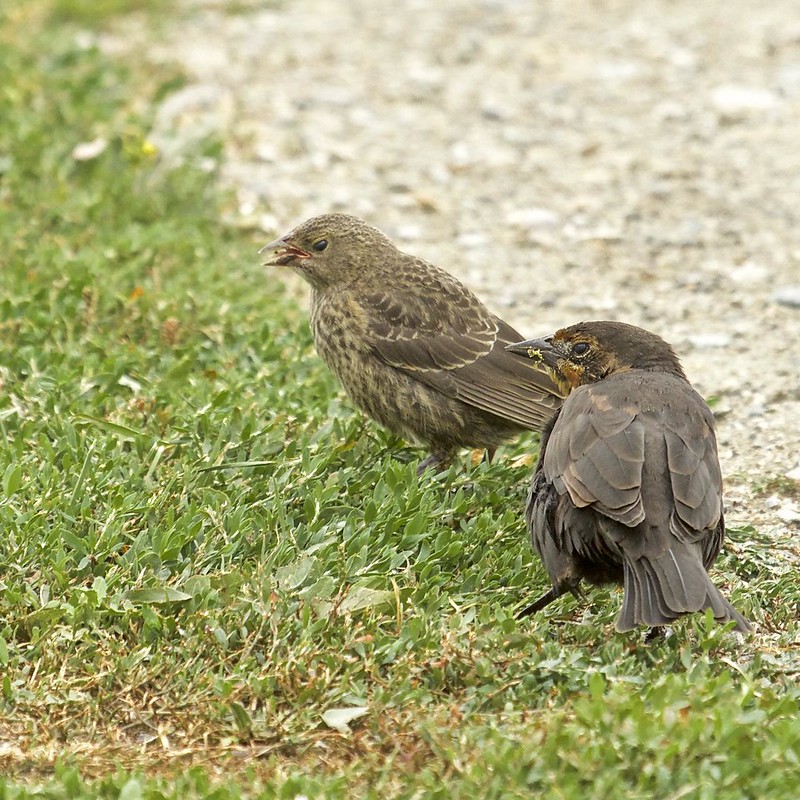 I suspect many of us have also wondered about the question in the title.
Went looking for answers online and came up with this:
(And, BTW, I'm not so sure, with the dearth of BROCs in the Thomson Marsh area, that the young cowbird above will fit into the explanation below....)

' When a Brown-headed Cowbird hatches from its egg, an identity crisis seems inevitable. Cowbirds are brood parasites, meaning that rather than raise their young themselves, they ditch their eggs in other species’ nests and allow these forced foster parents to do the tough work of chick-rearing. Baby cowbirds grow up with families that neither look nor act anything like them—sometimes in habitats in which cowbirds typically don’t even live.

“Cowbirds have to figure out who they are without their biological parents,” ecologist Matthew Louder says. The shocking thing is that somehow, most of them do—and in a recent study, Louder shows how. Like human teenagers, young cowbirds sneak out at night—though unlike human teenagers, these chicks’ evening rendezvous seem to be with members of their own family.

In laboratory experiments, cowbirds and other brood parasites that spend too much time with their foster families end up learning their host species’ songs, picking up their behaviors, and attempting to mate with them. In the wild, though, they’re somehow able to resist this—by the time they’re about a month old, they’ve learned to act like cowbirds, and they know to mate with their own species. The more Louder looked into the question of how they do it, though, the more he realized we really don’t know. “It’s kind of bothered people for a long time,” he says.

Louder recently published a study that showed that cowbird moms don’t totally abandon their young after laying their eggs, but keep tabs on them and even use the failure or success of different nests to inform their decisions about where to lay future broods. His colleague Mark Hauber suggested that these watchful mother birds may also be keeping their chicks from getting too close to their hosts. Maybe, the team thought, adult cowbirds have some contact with their offspring, which is how the chicks learn the ways of the cowbird.

To test that idea, the researchers attached radio transmitters to adult cowbirds and their young. The data revealed that the juveniles didn’t follow older birds away from the nests and rarely ventured to their mothers’ homes. Instead, they go on nighttime rendezvous.
“They seemed to, just one night out of the blue when they were about 20-25 days old, say ‘Oh man, I need to go somewhere,’” Louder says. “It’s almost like zugunruhe, or migratory restlessness.”

The data showed that young cowbirds leave the host nests shortly after sundown and roost overnight in the fields where the species typically lives before returning to their foster families the next day.

“When I saw them do it, I was just shocked. You’re gonna leave in the middle of the night to go somewhere you’ve never been?” Louder says. “To me, it just seems that would be the most dangerous time to do this, and that’s what led us to believe that it’s extremely important.”

The team thinks these night flights—which may be spurred by an innate preference for roosting in fields—give the cowbirds some independence from their foster parents and keeps them from becoming something they’re not. Since adult cowbirds roost together at night in the same fields, the young birds’ excursions could also give them the opportunity to mingle with their own species and learn the right behaviours.

Louder thinks his results help show that even parasites have to work hard to survive. “There's this weird animosity towards cowbirds among the public,” he says, but in his mind, it’s not deserved. Not only do the adults have to trick the hosts, sneak their eggs in, and keep an eye on different nests, but the chicks have to put some effort in just to learn to sing, forage and act like cowbirds.

“These guys are really cool. They have these crazy behaviors and what they're doing is really complex,” he says. “If this was easy, everybody would do it.” '
Keith R.
Kelowna
https://www.flickr.com/photos/8666250@N02/
For those inclined, check out my new blog, mostly about birds, called https://birdsandmusings.wordpress.com

Animals never cease to amaze me!

By Isaac -  Aug 16 11:59 am
-  Aug 16 11:59 am #79053
Awesome article Keith! And compared to other birds that are commonly called pests, cowbirds are native to North America, unlike European Starlings and House Sparrows.

Thanks for sharing this!
Isaac

After some tough thinking, I decided to dump Cano[…]

We finally got a break in the weather (at least fo[…]

Alright, thank you very much for your expertise!

Thanks, Judy, for the info. Now that you have give[…]