Winter Hummingbird in Whistler in -20C

By WhistlerBird -  Dec 26 6:11 pm
-  Dec 26 6:11 pm #91061
I have a female Anna's hummingbird that refuses to migrate. Everything a read says to leave the feeder up and the bird will migrate on its own. Everything says they will be fine if they decide not to migrate. I disagree. What should I do? Tomorrow I am creating a trap by placing the feeder inside a reptile cage to try to capture this cold little guy and bring it inside. I am hoping by the time I capture it someone will know where I can drive this hummingbird to in the lower mainland so that it can have a warmer Winter elsewhere. Vancouver is currently -7C which is warm compared to -20C. If some experts decide it is fine here in Whistler I can release it but I feel uncomfortable if it is suffering. 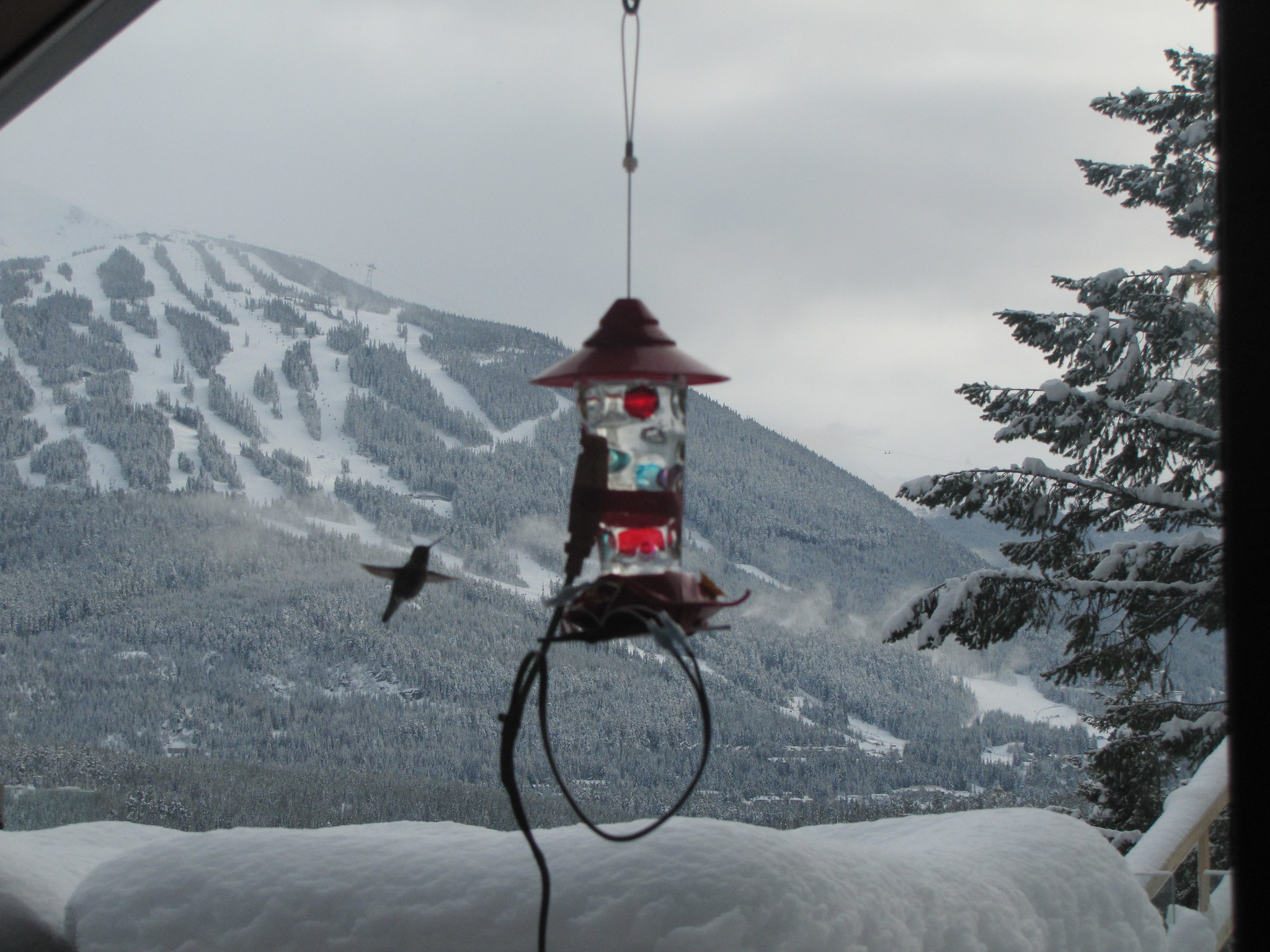 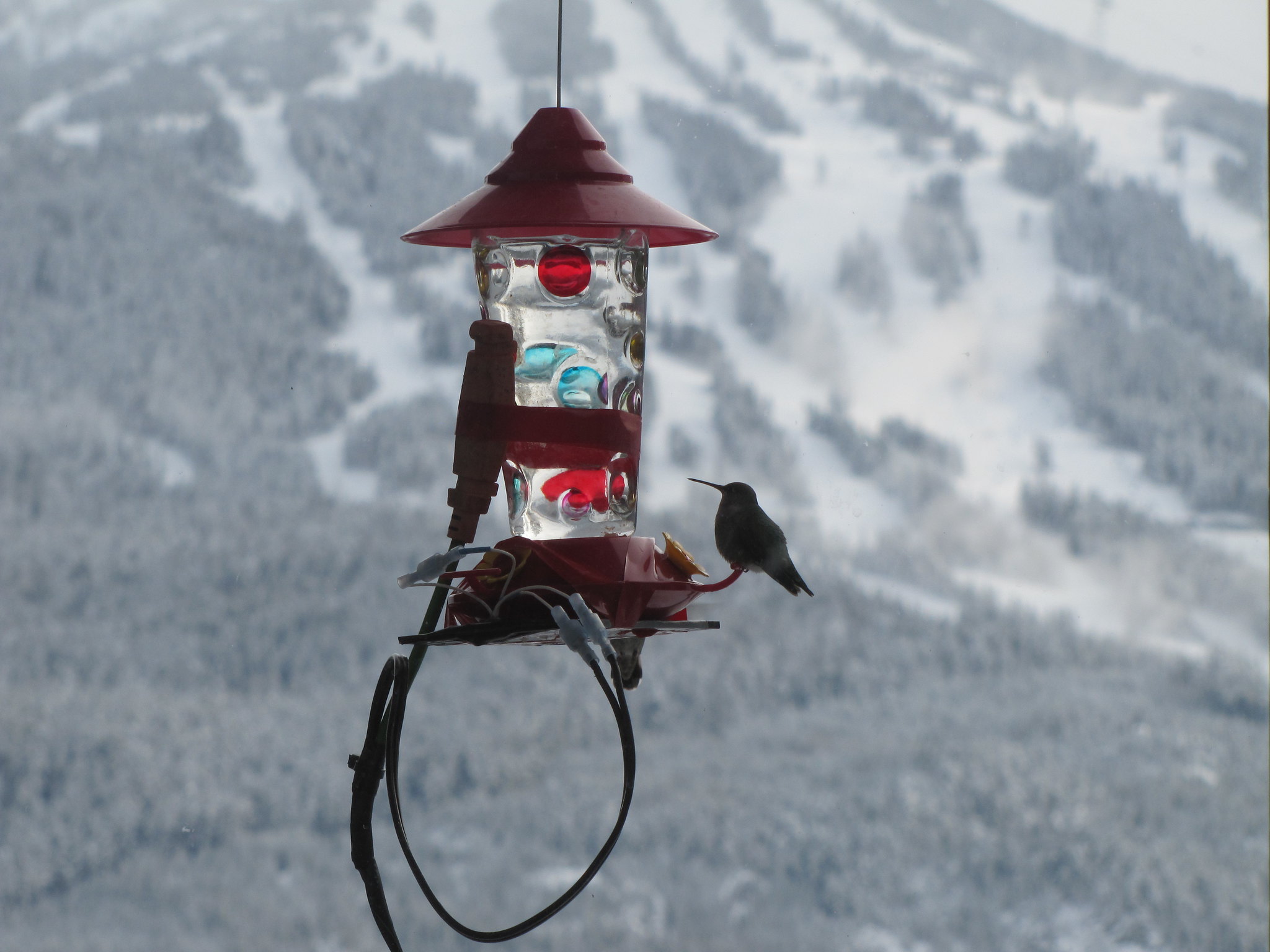 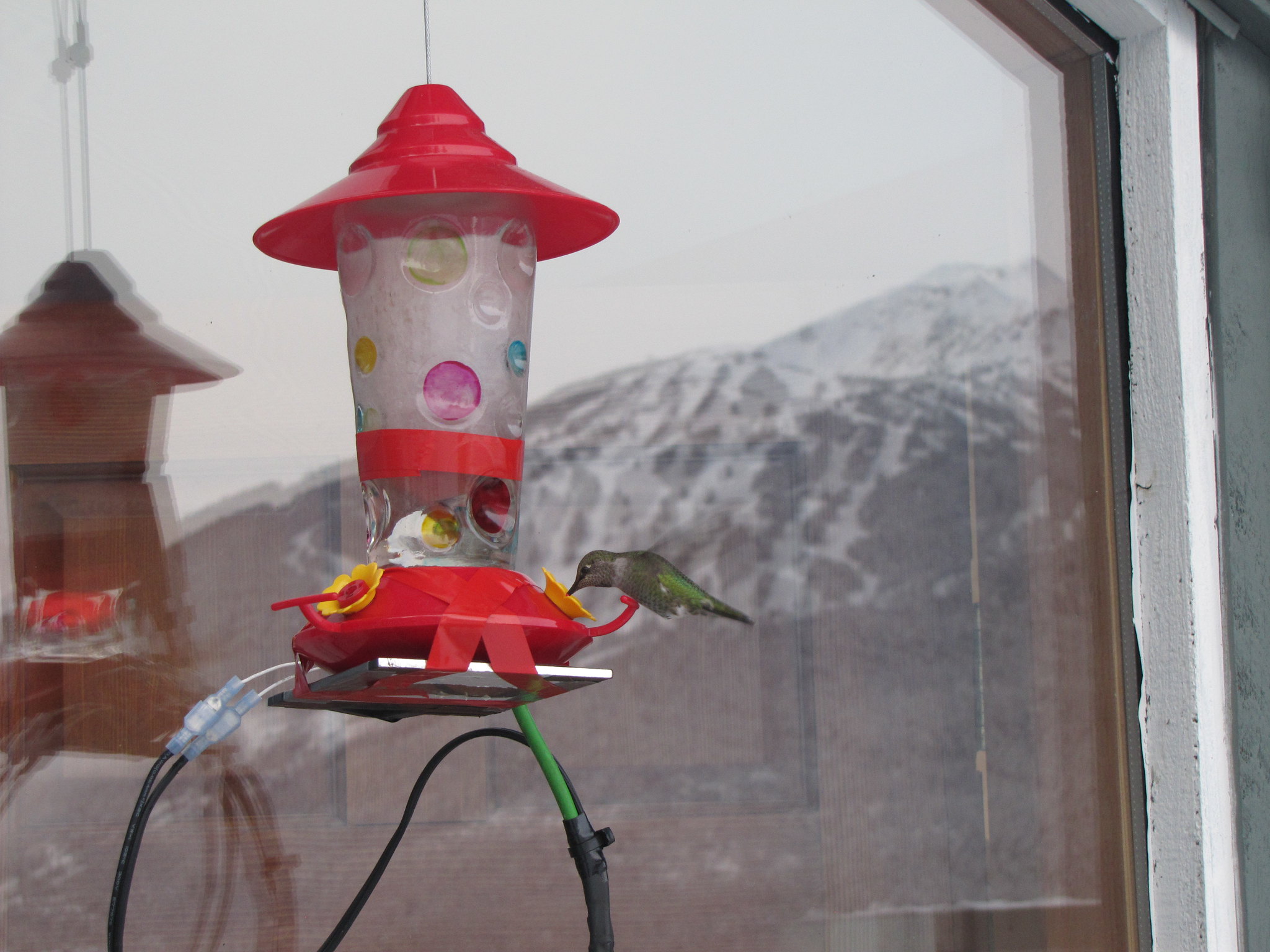 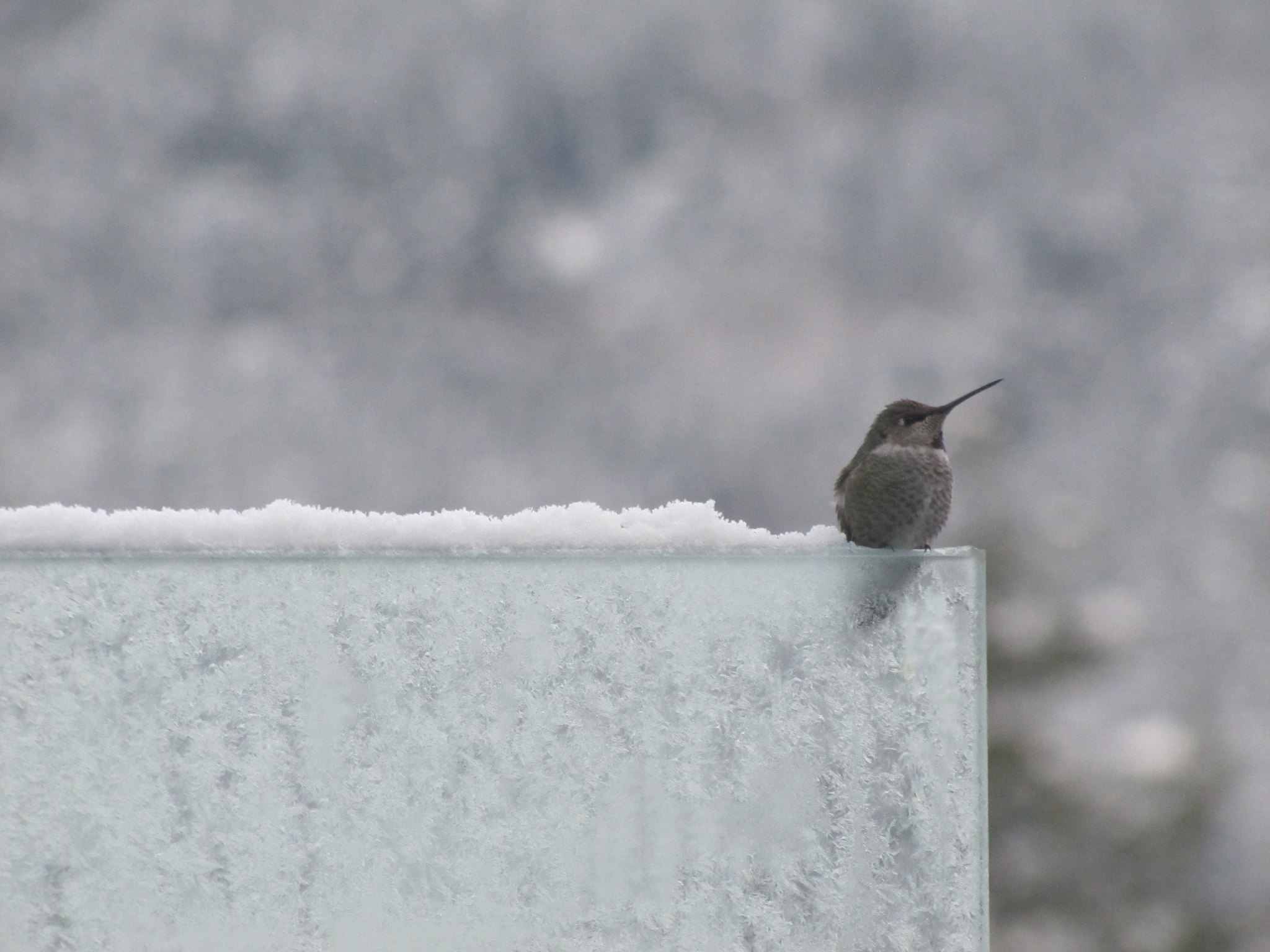 It's good to see your heating the feeder, this way it keeps the sugar water liquid!

Anna's Hummingbirds are increasing their range, but are dependent of feeders when temps are cold, so just keep feeding her!

There are other Anna's Hummingbirds up the sea to sky highway, even in Lillooet BC!

There are Anna's Hummingbirds in the Okanagan where it's minus 23!

So the hummingbird is fine as long as it's got sugar water to drink!
Rob Alexander
North Vancouver
http://www.flickr.com/photos/northvanrob/

By WhistlerBird -  Dec 27 2:43 pm
-  Dec 27 2:43 pm #91064
Thanks northvanrob. If Anna’s Hummingbirds don’t migrate what did they used to do before humans started providing (heated) feeders? My guess is that there are no flowers in bloom in BC right now. I don’t want to sound rude, I’m trying to understand and the best answer I have found so far is the following (direct copy-paste) from wikipedia.org/wiki/Anna%27s_hummingbird

“While their range was originally limited to the chaparral of California and Baja California, it expanded northward to Oregon, Washington, and British Columbia, and east to Arizona in the 1960s and 70s.[4] This rapid expansion is attributed to the widespread planting of non-native species, such as eucalyptus, as well as the use of urban bird feeders, in combination with the species' natural tendency for extensive postbreeding dispersal.[12][28] In the Pacific Northwest, the fastest growing populations occur in regions with breeding-season cold temperatures similar to those of its native range.[4] Northward expansion of the Anna's hummingbird represents an ecological release associated with introduced plants, year-round nectar availability from feeders supplied by humans, milder winter temperatures possibly associated with climate change, and acclimation of the species to a winter climate cooler than its native region.[4][24] Although quantitative data are absent, it is likely that a sizable percentage of Anna's hummingbirds in the Pacific Northwest still do migrate south for winter, as of 2017.[24]
In the 2017 Vancouver Official City Bird Election, Anna's hummingbird was named the official bird of the city of Vancouver, British Columbia, Canada,[29] where it resides year round through winter.[30]”

Last night it got down to -22C with a wind chill of -32C and blowing snow. It is 2pm and -20C and normally we would have seen her a dozen times at the feeder before 9am.

For the last two months she would visit the heated feeder dozens of times a day. Hardly an hour would pass without her visiting the feeder. She would also perch close to the feeder so she could watch over her territory and food supply. That heated hummingbird feeder was her life line. It has been two days of -20C temps and no sign of her.

A Whistler Winter Hummingbird Obituary
On Dec 26th, 2021, the Whistler Winter Anna’s Hummingbird passed away silently in the night perched on a lonely cold tree branch during her torpor sleep in -32C wind chill. She was able to handle -18C but I’m guessing that was a struggle as she was having trouble flying and could no longer hover. On Dec 26th an Arctic outflow event created overnight temperatures of -9C in Victoria and -13C in Vancouver. Whistler went down to at least -22C but maybe lower (the environment Canada weather station stopped working) accompanied with high gusts of wind. She tried hard, the force was strong with her. She will be missed. RIP.

I hope all the other freezing hummingbirds across this province are surviving without too much suffering.

By bshier -  Dec 30 1:54 pm
-  Dec 30 1:54 pm #91073
I am far from an expert on this subject, but in speaking with someone who is much closer to these issues the comment was made that the folks in the Whistler area should take their hummingbird feeders down at the end of the fall season (say end of September). In doing so it reduces the attraction for Hummingbirds to stick around through the winter as there will inevitably be a long cold spell in Whistler. While I recognize this approach is not something that can be implemented by a single individual, it did seem to make sense to me.... Just some thoughts...

Feeders that are turning to slush with the cold , many now are using a lights to keep the feeder liquid!

My sister's husband wrapped a light bulb with tin foil, now the Anna's Hummingbird likes to sit above the heat in this cold weather!

It seems that 2020 was the extremes of weather all caused by climate change!

It will become our new normal in the future!
Rob Alexander
North Vancouver
http://www.flickr.com/photos/northvanrob/

By Fletcher -  Aug 27 4:47 am
-  Aug 27 4:47 am #91477
Hi, I'm a new member,saw your post from last winter. Same thing happened to me. Live in Pemberton, hummer didn't migrate. As it got cold,kept feeder from freezing and supplied a heat lamp with a perch close-by. All december came and fed, and stayed on perch. As it got colder, hummer stayed longer by heat lamp. Leaving later and later, to sleep. December 25th last night I saw him. After 4 or so nights with extreme cold, I guess the hummer froze in torpor

We got rained on in Stanley Park today and then t[…]