NewWestBirder wrote: ↑Jul 25 3:03 pm James' earlier description of his Black Mountain Park trip (and his picture) was so compelling, I drove out from the coast a few days ago, and had a wonderful time. Not only went to Black Mountain (such a beautiful walk amongst the grasslands and hills) but hit Carney Pond, Robert Lake, and Chichester Bird Sanctuary and Knox Mountain. Loads of birds, many firsts for me, and many great pics. I stayed at the UBC campus, and all the bird sites were 10 to 15 minutes drive from there. It was perfect. Most of my captures already posted earlier, but here are my new contributions.

Virginia Rail: Went to Chichester Park, in middle of residential area. Not much happening, but I decided to walk around, and saw a break in the brush, and walked into a dark area, under a large tree, where I saw some waters edge, reeds, swampy area. And what should appear a minute or so later, but a Sora, and this Rail, foraging together. Even more, my camera noise didn't bother them at all. A real gift from the birding gods. Only challenge was the lighting, as they went from dark shadows to partial lighting. Ended up with high ISO.


Wow, Randy! Great time in Kelowna I see ... haha. I'm jealous of the Sora/Rail and I live here. lol. Thanks for keeping the pictures flowing -- I was out of the country for the last month visiting family. I've got a couple of pictures to add, but am still sorting photos ... If you plan another trip this way, message me (or email [stumblingpiper at hotmail]) and we can hit a few other places.
James
James C
Professional Recreationalist

By stumblingpiper -  Aug 29 1:26 pm
-  Aug 29 1:26 pm #91481
Last week I was hiking in the Johns Family Nature Conservancy south of Kelowna. A beautiful park with access to some great birds! We saw several Turkey Vultures and Hawks soaring along the rock face ... we heard (and saw) several smaller birds. This one stood out in song and we waited around and were rewarded with a nice show! A Canyon Wren. The only Wren missing from our list now is the Rock Wren (Ian?? 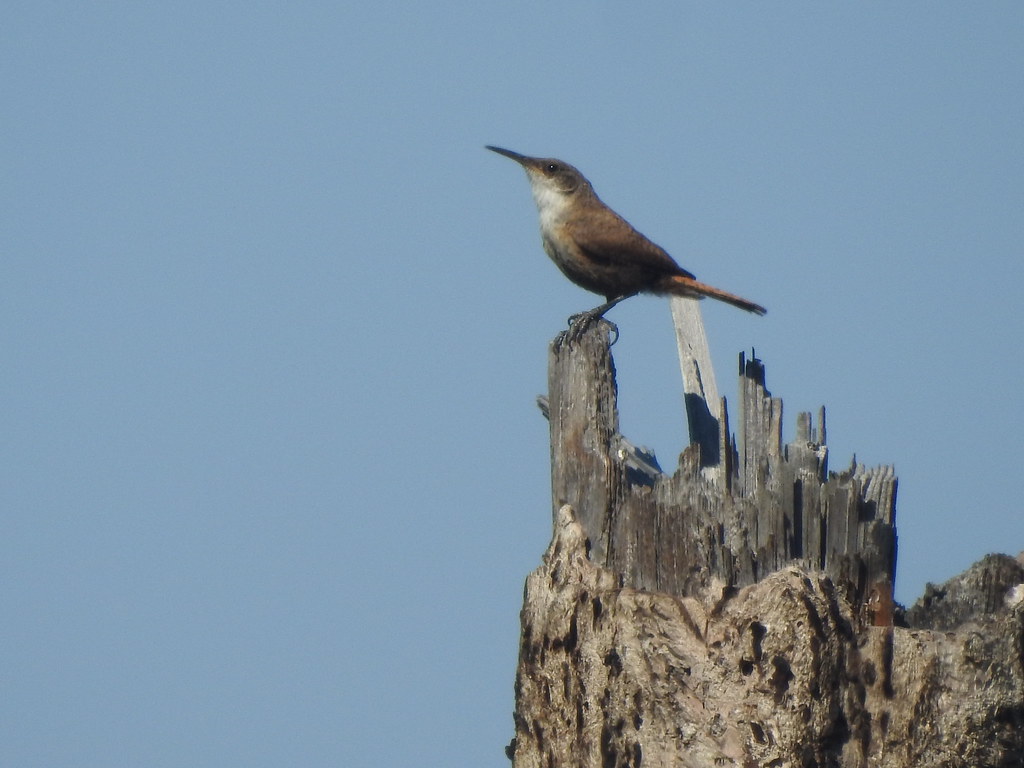 Here he is singing away! (sorry, I couldn't get a picture and a video Kevin!) 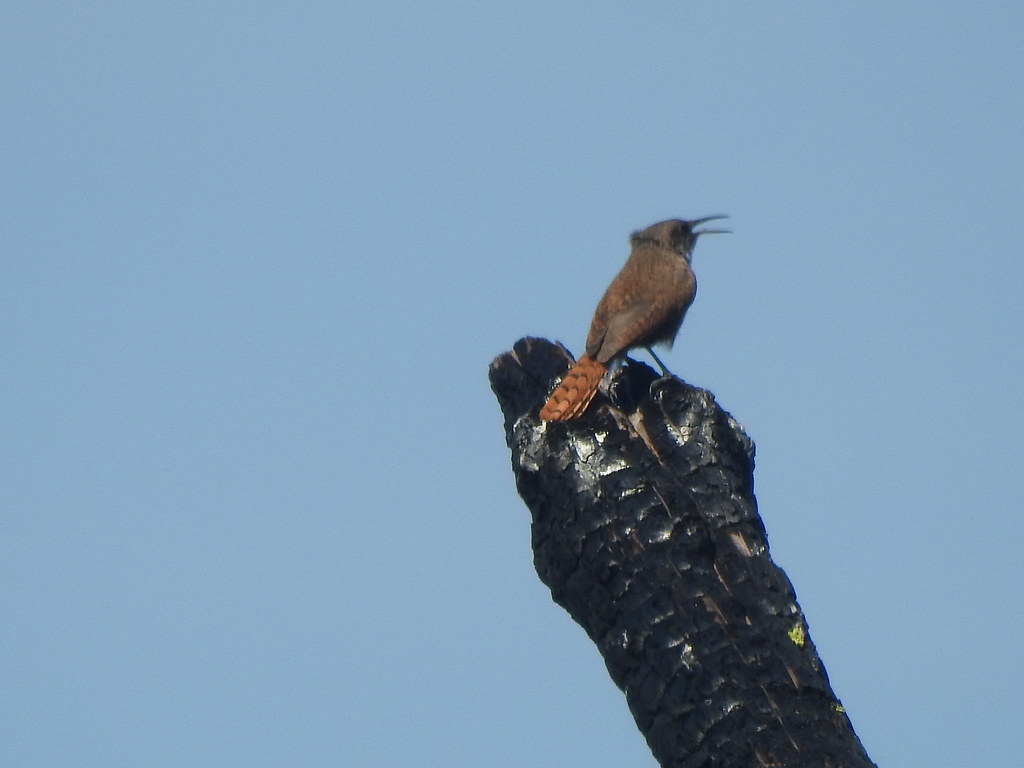 I have a bunch and I'll find a few more later from earlier in the year.

Long-eared Owl (this was back in February): 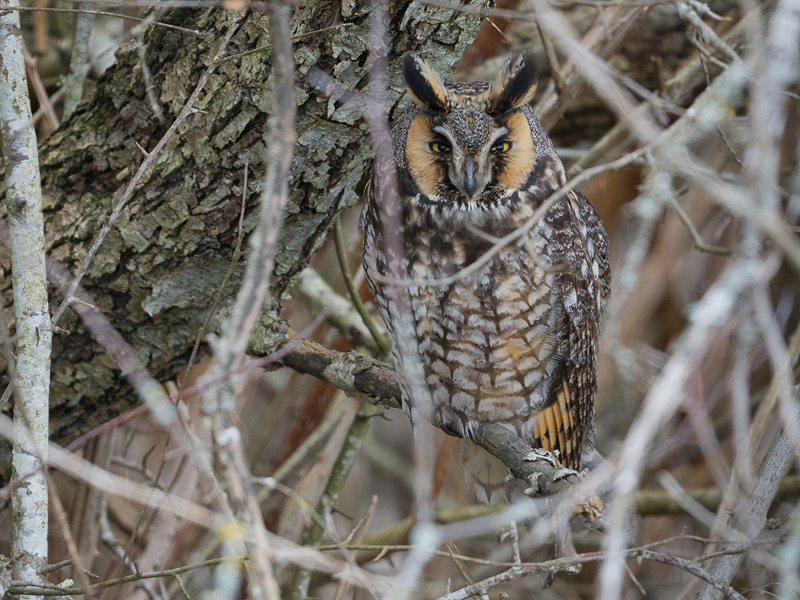 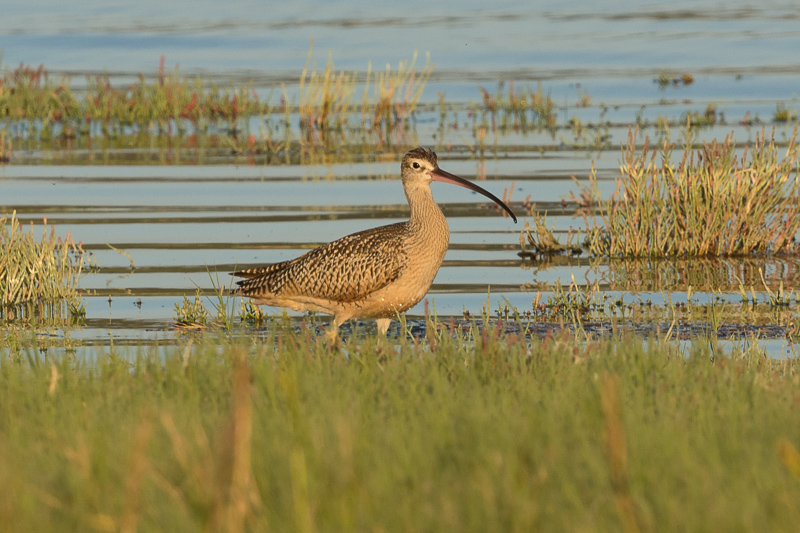 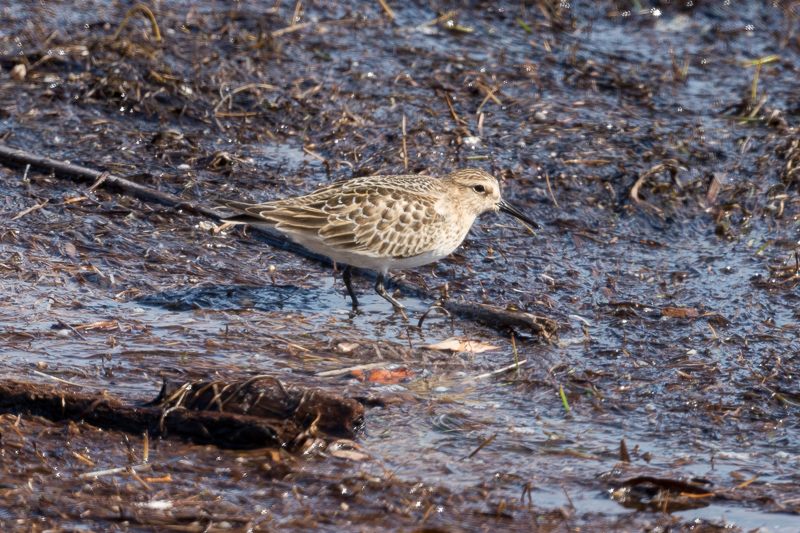 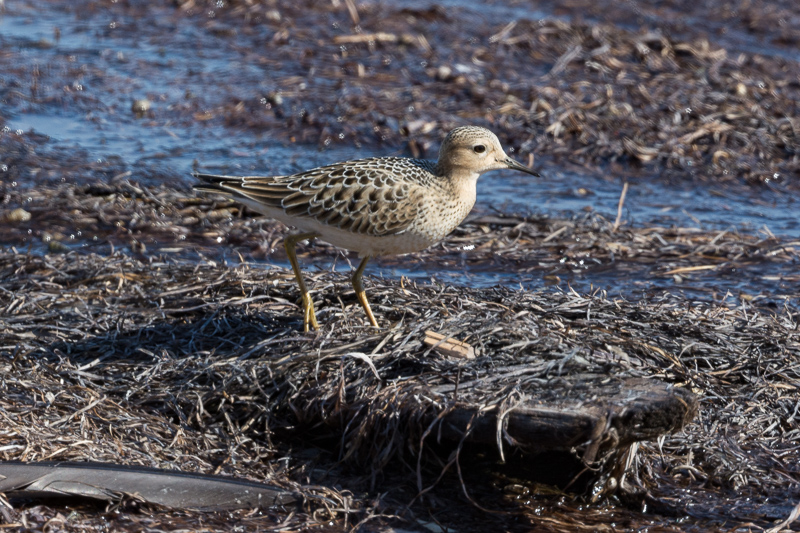 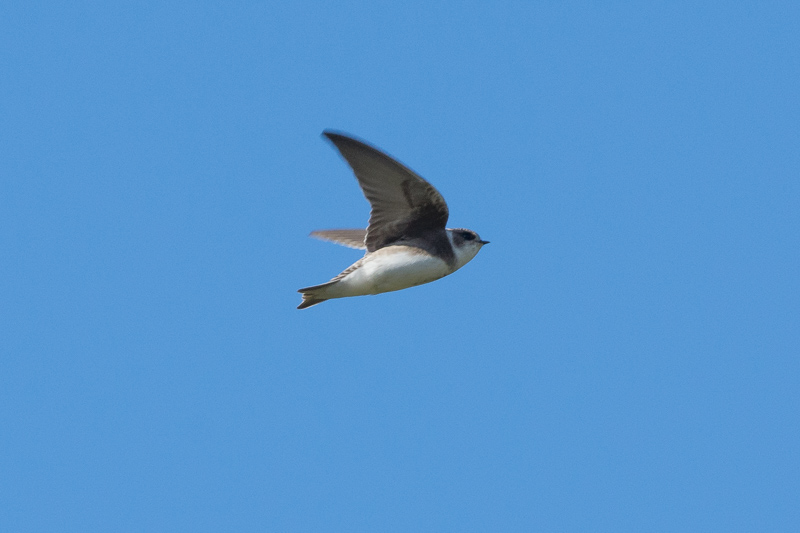 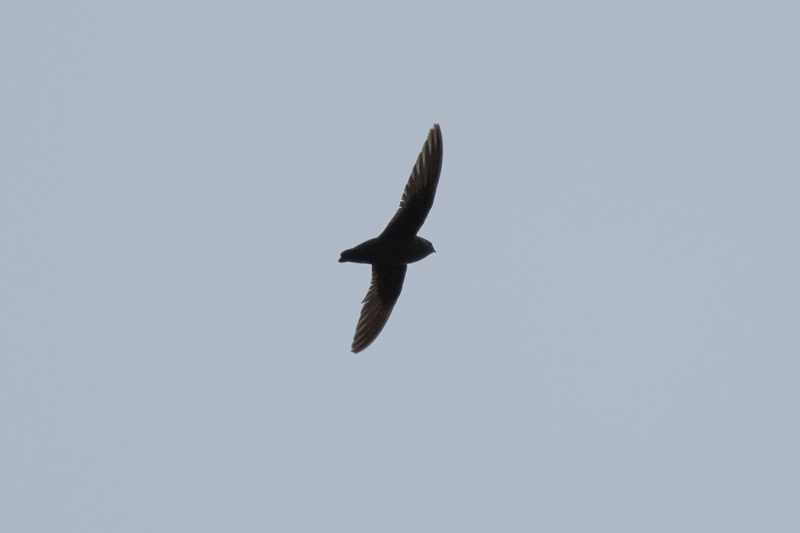 There has been a Black-and-white Warbler around for months now, and despite hours of waiting for it to show itself, this is the best I have managed: 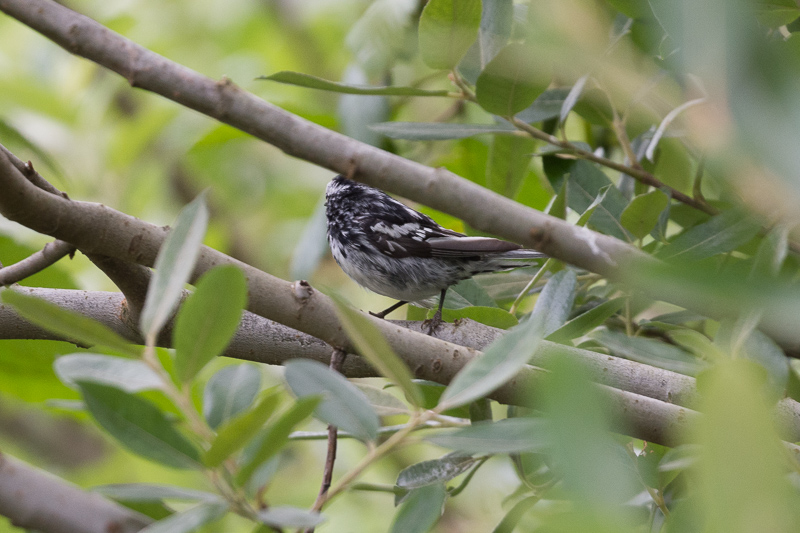 Steely wrote: ↑Sep 07 8:10 am Very nice adds to the list! Very busy last couple of months and minimal outings…
Rock Wren… I’ll see what I can do…

Lol ... Thanks, Ian! Any other migratory bird you see passing through would help too. 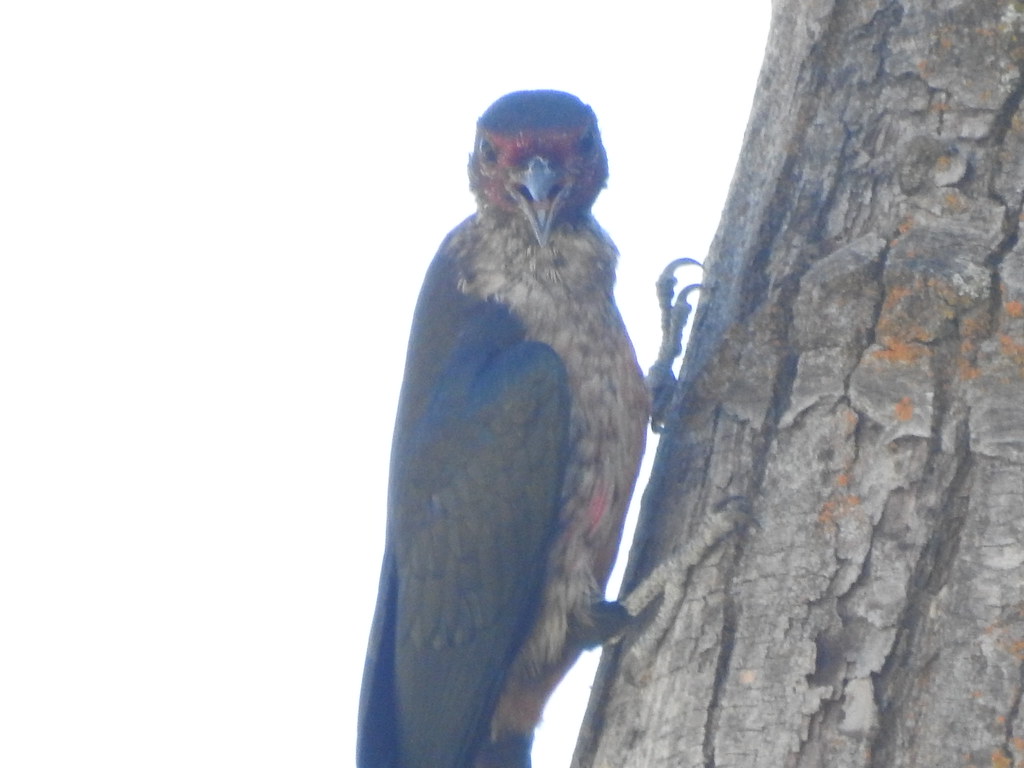 He/She had a tongue hanging out in this picture ... 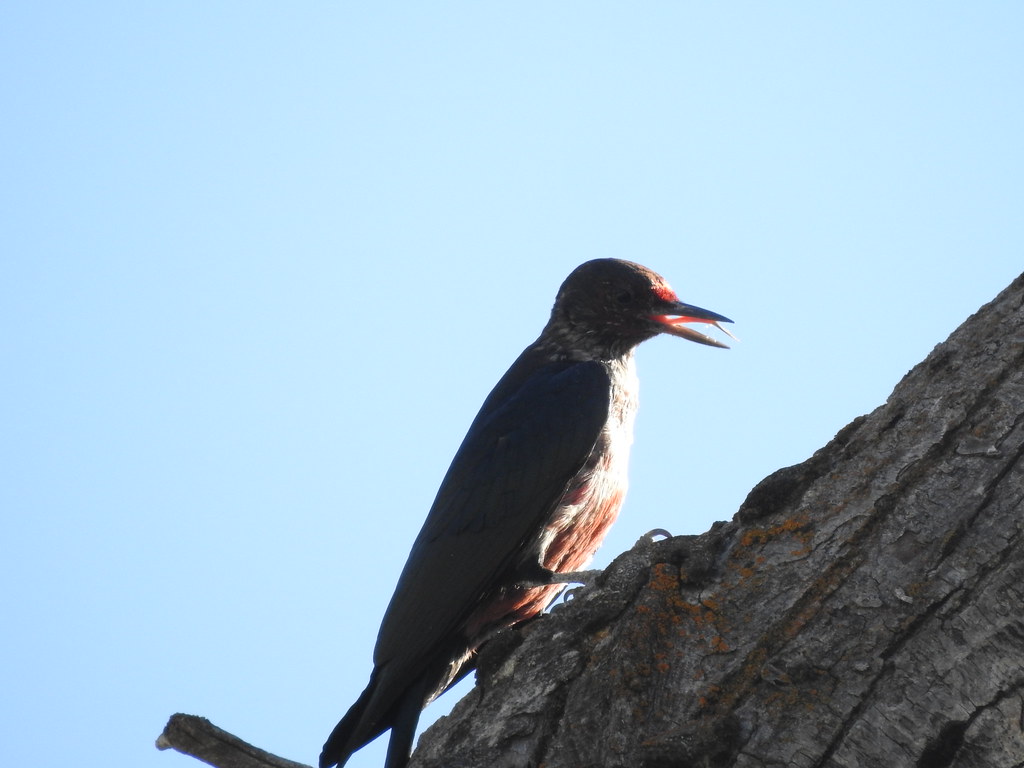 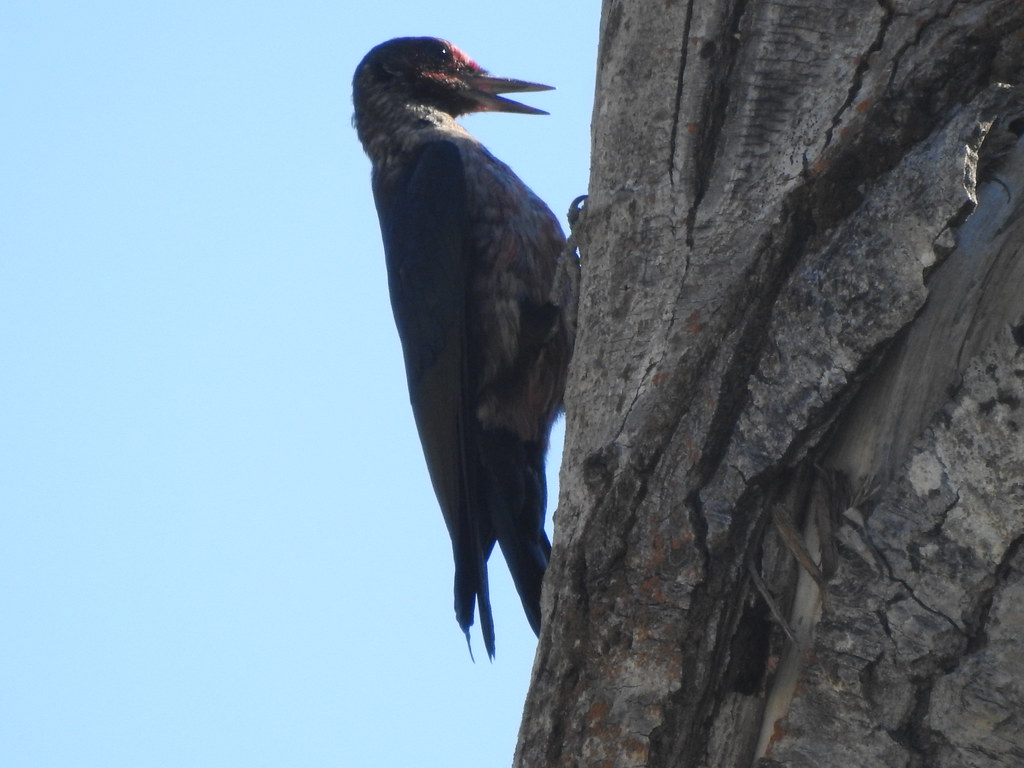 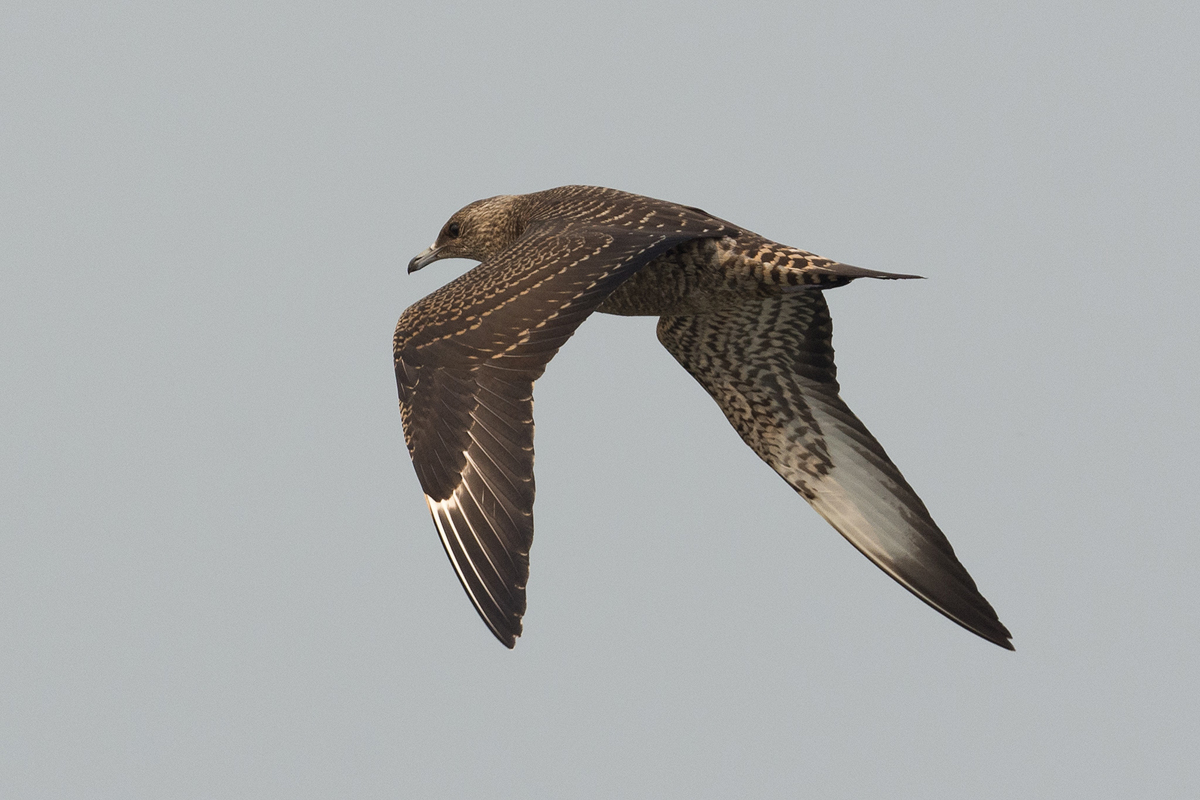 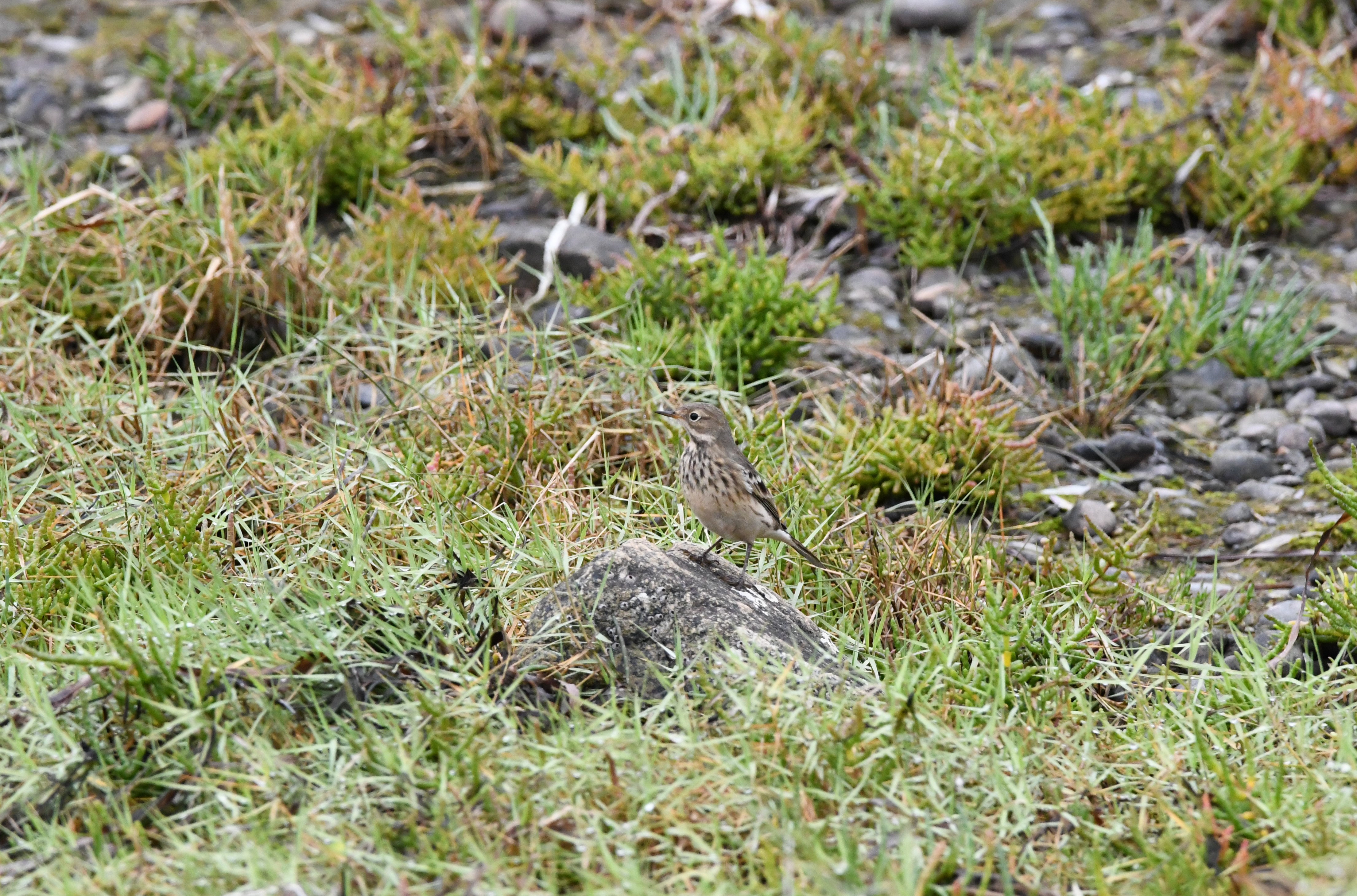 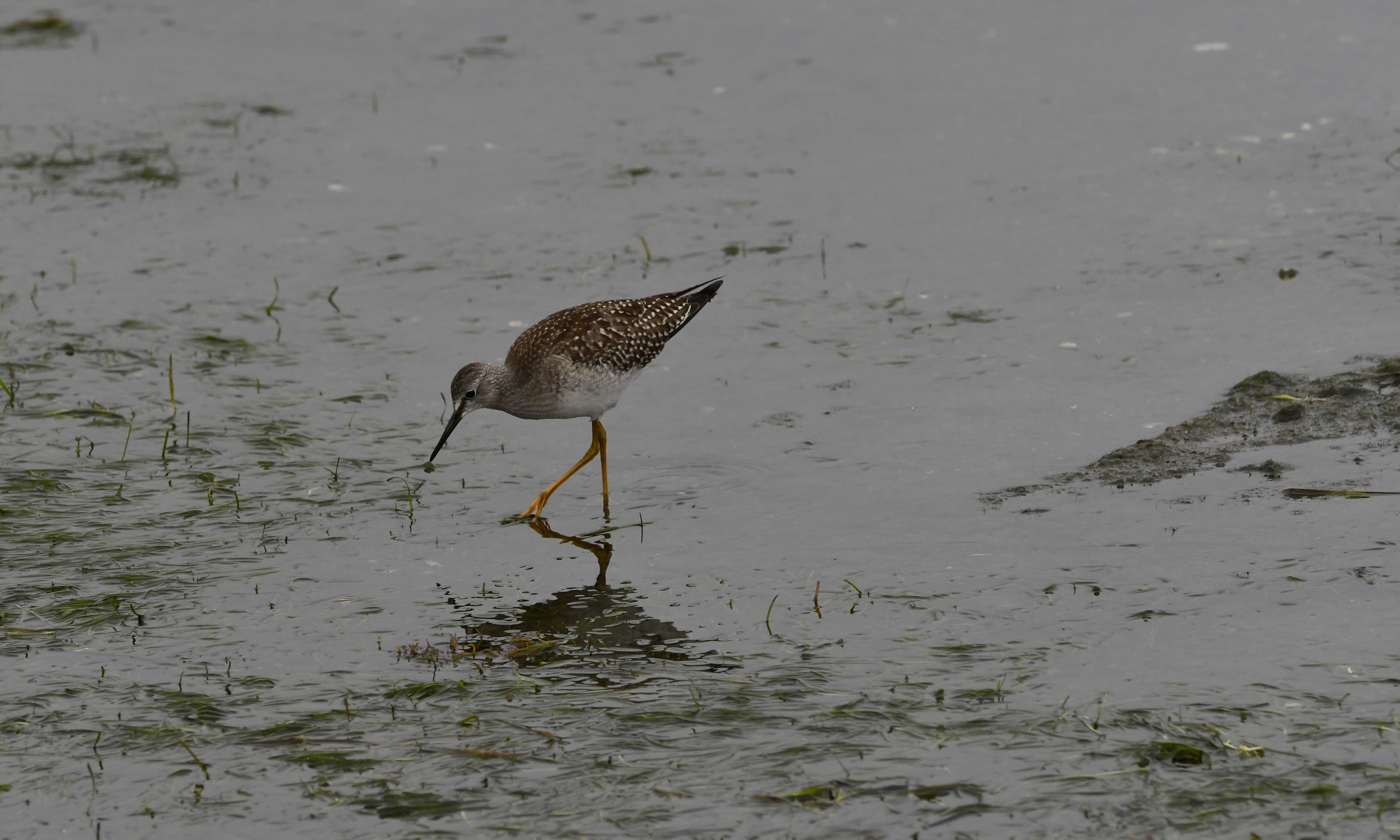 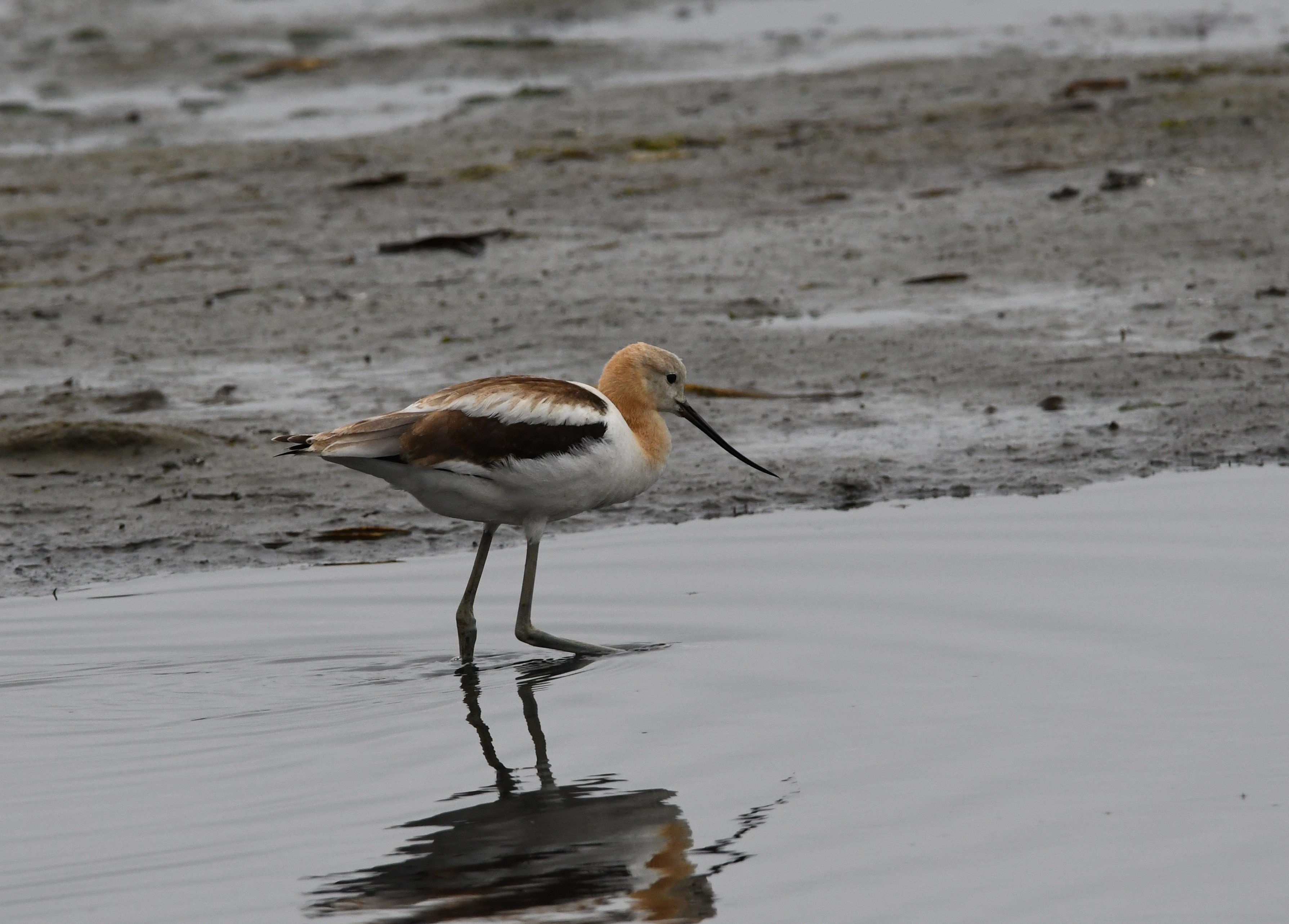 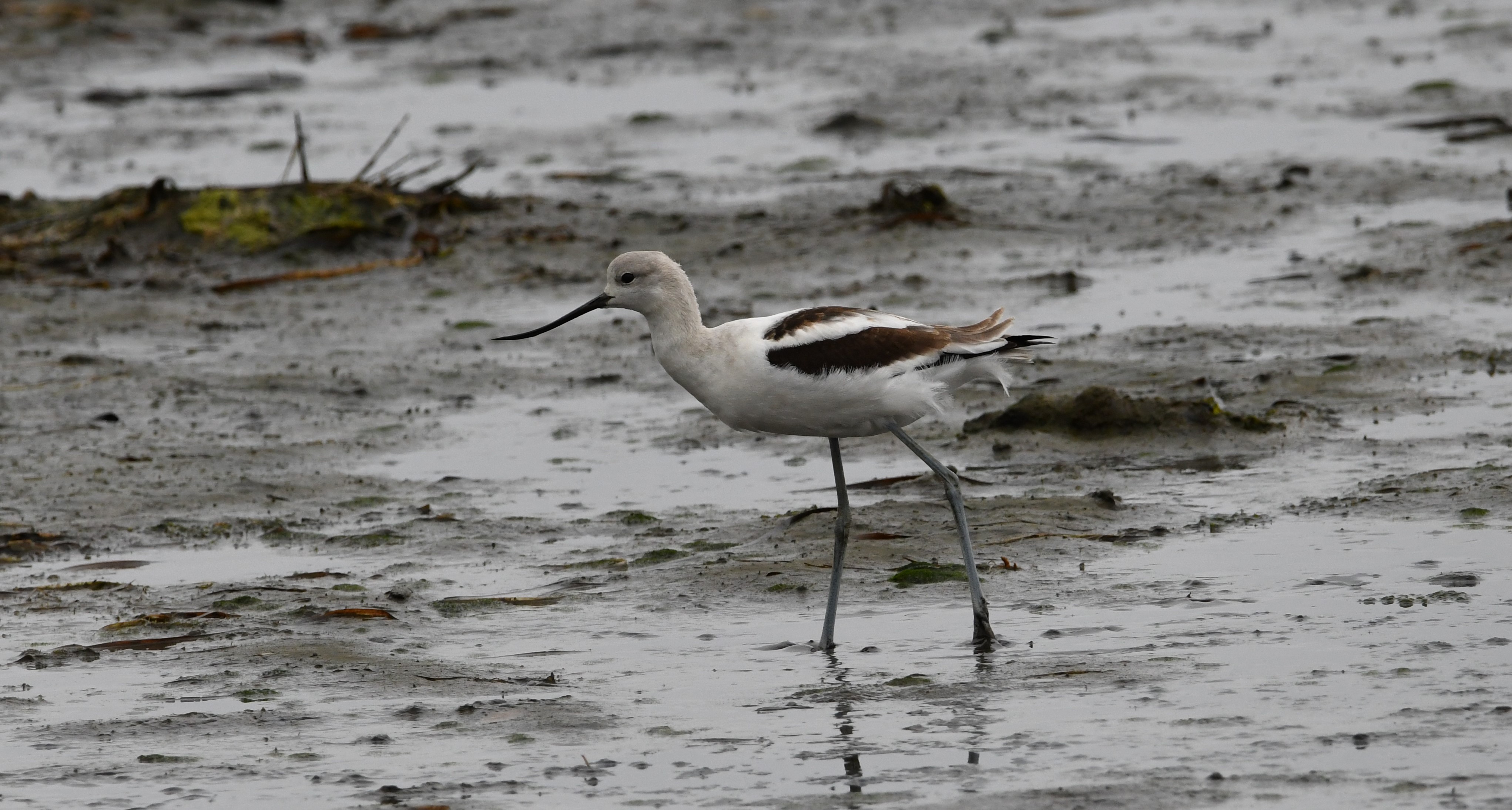 American Avocet (female). I am going out on a limb here..as per my reading one difference between male and female is female has a more bent bill on the end, and looking at all my photos I took today seems to indicate to me that the second bird has that feature. I will humbly stand corrected it someone cares to express a different view. 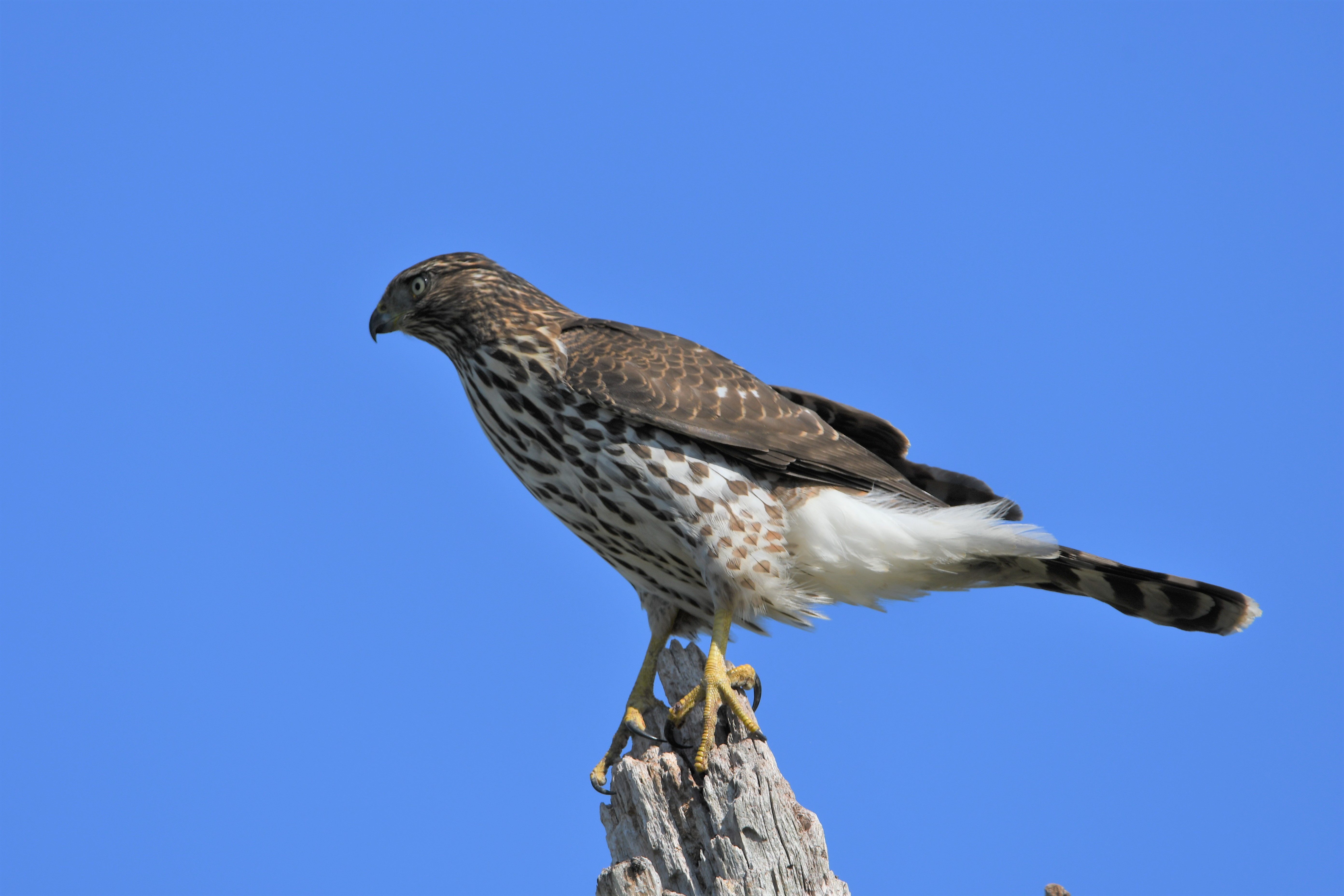 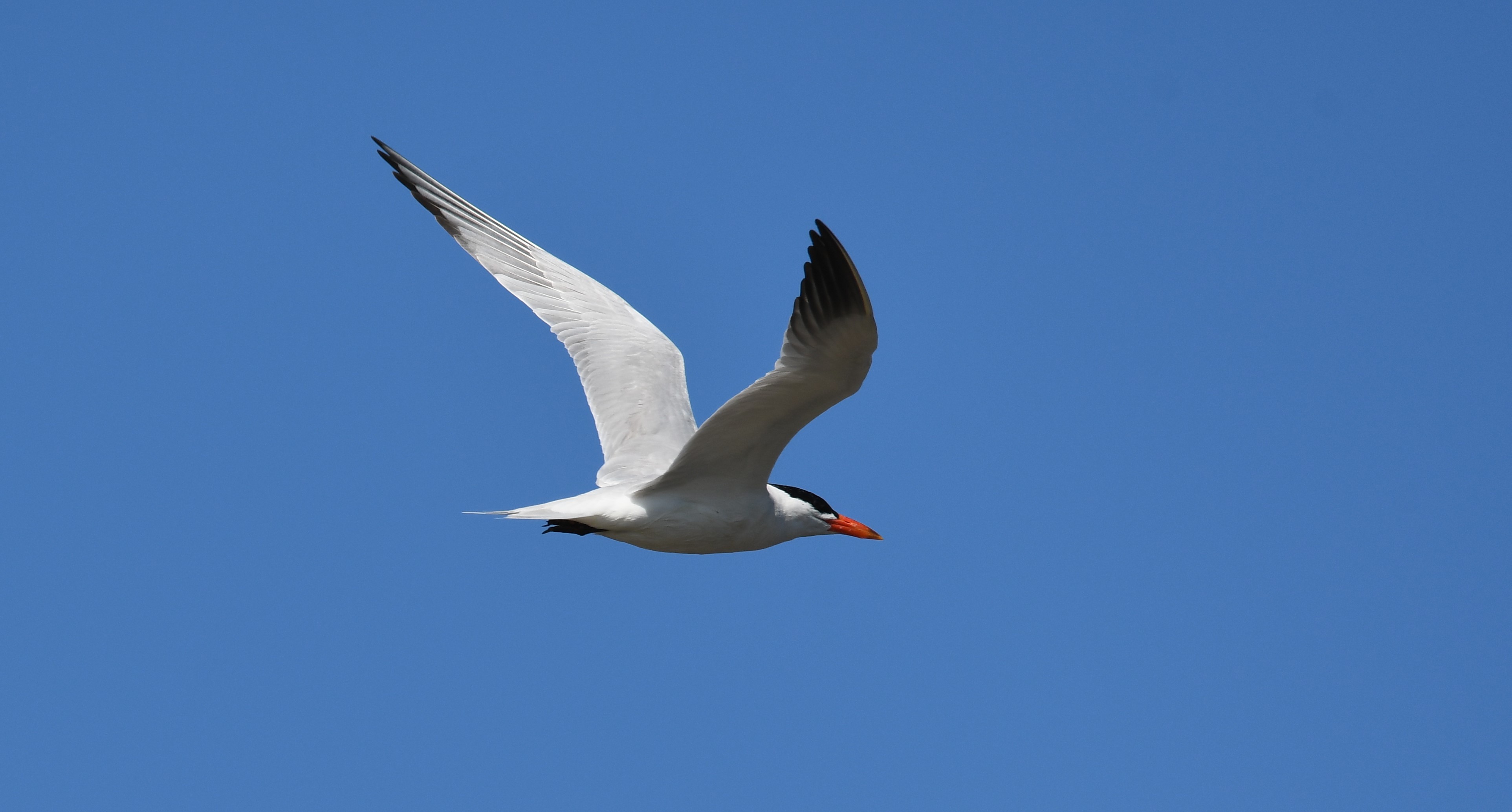 Having spent some time reading material on comparisons of the two hawks, and viewing many pictures of both types, I now think that this is a Coopers. My reasons: 1. Coopers have thicker legs than Sharpies, says the literature. All the pictures of Sharpies I have seen show rather spindly legs on the bird. In my shot, these legs are rather robust, i.e., the legs of a Cooper. 2. Sharpies apparently have short, or next to no, necks. In many of the images, the head looks like it is perched on top of the body. Coopers apparently have more of a neck, and I think my shot displays this feature. 3. The white band on the end of the tail is apparently wider and more distinctive on the Coopers, and it is certainly very noticeable in my shot. 4. And this last point is impression only: Sharpies are the size of a jay or dove, Coopers a little bit bigger, like a crow. My impression is that my bird was not a jay or dove size bird, but closer to crow size.
So, with this rationale, I am presenting this bird as a Coopers, which I don't think is on our list yet.
As always, I am happy to hear other opinions, as I can't claim to be dead certain.

We got rained on in Stanley Park today and then t[…]